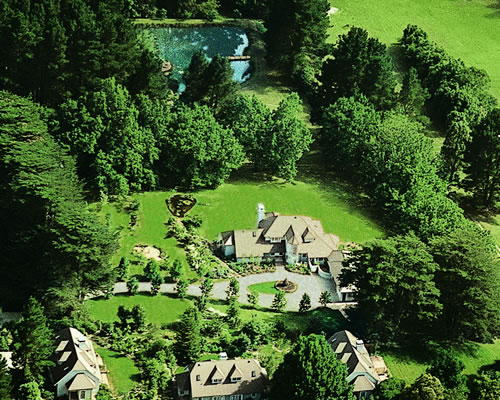 The gardens and grounds of Parklands were established by John Pope, a wealthy businessman who appreciated gardens and who promoted the use of floral decoration through his partnership in Farmers, a distinguished Sydney department store. John Pope was one of the early purchasers of land at Blackheath during the initial sales in 1879-1881 and purchased 12 acres just outside the parish of Blackheath in 1880.

Pope soon set about establishing his house Karaweera on the estate, which he expanded to 22 acres by the purchase of the adjacent portion of land. Every summer he would come to escape the heat of the city and bring his entourage of servants. Karaweera was a substantial and attractive home. Photographs taken around 1902 show the house as an extensive brick dwelling, probably built in two stages. Verandahs opened between the bay fronts overlooking the extensive grounds. In front of the house, the garden was laid out with rectilinear paths, edged with shrubs. A row of pine trees ran along the boundary and trees were planted to separate the formal garden in front of the house from the expansive lawns beyond.

As with many of the Sydney businessmen and politicians who developed their mountain retreats, the development of a garden was important to John Pope. In 1890, seven years before he hired his well-known gardener, Thomas Kerslake, Pope’s property was described as having been brought to ‘such a pitch of perfection that it is now readily accorded the palm as a model farm and residence throughout the district’. The pines which still line the boundary of Govetts Leap Road had been planted well before 1890 and were by that time ‘rapidly attaining substantial proportions’. The English grasses and clover were thick and strong and the cottage was surrounded by a flower garden. Fruit and vegetable gardens, cow pastures, pig paddocks, fowl and duck yards and breeding pens had all been laid out. In the fruit orchard were a variety of apples, cherries, plums, greengages, pears, apricots, quinces and mulberry, all protected by a windbreak of pine trees on the west side and a hedge of hawthorn on the north.

A natural spring fed a fish pond stocked with carp, tench and gold fish. At the bottom of the garden was a swimming pool ‘thirty-two feet long, twenty feet wide and about five feet deep’. The pool was supplied by water from the natural spring.

All the paths in the garden were well constructed with gravel drains below to take away sub-surface water and ensure the soil did not become too moist.

To maintain and develop these gardens at Karaweera, Pope employed in 1897 a full-time professional gardener, Thomas Kerslake. Kerslake was clearly indispensable and in 1909 Pope purchased a cottage on the opposite side of Govetts Leap Road known as The Laurels to accommodate him.

John Pope died in 1912 and was succeeded by his son Parke Pope, who had also become general manager of Farmer’s. Parke was a dedicated golfer and built his own nine-hole course at Karaweera, which ‘wound its way round the orchard and vegetable garden. It is likely that Kerslake supervised the transition of the gardens to accommodate the golf links. Parke Pope was also a principal mover in preventing the sub-division of the public golf course in Blackheath, at Belvedere, in 1922. Pope formed the Blackheath Land Co., with himself as Chairman of the board with the purpose of establishing a new Blackheath Golf Club. Pope was the first president of the Golf Club and remained in control until 1924.

It was Parke Pope who employed the landscape designer and nurseryman Paul Sorensen in the 1930s to redesign the front garden along Govetts Leap Road. Plantings of Japanese Maples and a more extended palette of conifers have been attributed to advice in 1938 from Sorensen.

After Parke Pope’s death in 1955, the property became a guest-house. Around 1970 the name was changed to ‘Parklands’. In the 1980s John Pope’s house was severely damaged by fire and was demolished without trace around 1989. In 1993 Colin and Elizabeth Jacobson purchased the estate and developed a luxury retreat called Parklands Country Gardens and Lodges which opened in 1996 with two new garden cottages containing eight executive suites. Four more suites in another cottage were added in 1998 and a conference facility opened in 1999.

In 2013, the Escarpment Group added Parklands Country Gardens and Lodges to its collection of Blue Mountains properties with a view of adding to the story of luxury sustainable regional tourism within the region.  Following an extensive redevelopment and renovation of Parklands Country Gardens and Lodges has been transformed back to its glory days of Karaweera. The transformation included an addition of four new garden cottages, each containing four suites, the addition of a new Day Spa, expanded conference facility and a 4000 sqm private kitchen garden.